Discover the Fascinating History of the Kaituna River

The Kaituna River is considered the epicentre of NZ’s whitewater kayaking and rafting scene. Much-loved by tourists seeking an adrenaline surge, for extreme whitewater paddlers, it is home. Read on and learn the history of NZ’s most famous rafting river.

Keen to experience the world’s highest commercially something? Talk to Rotorua Rafting about our whitewater rafting trips.

What is the Kaituna River?

Fifteen-minutes east of Rotorua, you’ll find the Okere Falls settlement, home to some of the country’s most passionate whitewater rafters. This is the start to the Kaituna River which carries outflowing water from nearby Lake Rotorua and Lake Rotoiti towards Maketu. It is a winding 50-km river of fast-flowing waters surrounded by stunning native bush. 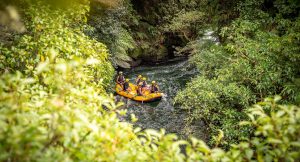 History along the falls

Immersed in Maori history, the Kaituna River was traditionally a bountiful eeling and whitebaiting river for the Ngāti Pikiao people. Translated into English, the name Kaituna means eat (kai) eels (tuna). Tutea Falls – a seven-metre drop – is named after Chief Tutea, who is buried there. The Falls also housed caves in which Maori women and children would hide during times of conflict.

In 1901, the NZ government harnessed the Kaituna River’s fast flowing water to build one of the country’s first hydroelectric power stations. It only ran until 1936, but the historic building can still be seen next to the upper part of the river.

Today the Kaituna River is largely the domain of paddlers and trout fishers. 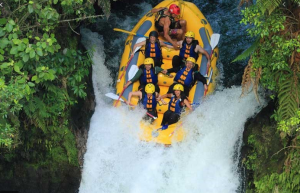 There is a huge distinction between the upper and lower gorges along the Kaituna. While the entire river holds grade five rapids – on a scale from one to six! – the upper part of the river is frequently used as training ground for mid-level kayakers and is safe enough for commercial rafting trips.

Each section of the upper rapids is followed by calm water. It is home to four amazing waterfalls, including that infamous seven-metre drop that our Rotorua Rafting will guide you down.

The lower gorges are strictly for the most skilled, daring and experienced kayakers, and even then, danger lurks and lives have been lost. Kayakers paddle down three unyielding lower gorges, Awesome, Gnarly and Smokey – there’s no calm water to rest and no room for mistakes. 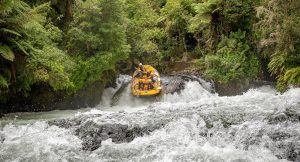 If you are after adrenaline-pumping rafting trip along the safe, upper section of the Kaituna River, book a guided trip with Rotorua Rafting and experience the world’s highest commercially rafted waterfall.